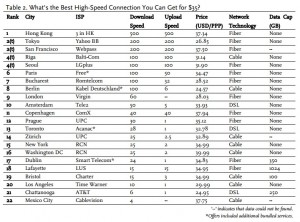 Check out a July 2012 report mapping and comparing the cost of connectivity worldwide. The study compared the price and speed of the Internet in 22 cities including the following U.S. cities: Bristol in Virginia, Chattanooga in Tennessee, Lafayette in Louisiana, Los Angeles in California, New York in New York, San Francisco in California, and Washington DC; and the following international cities: Amsterdam in Netherlands, Berlin in Germany, Bucharest in Romania, Copenhagen in Denmark, Dublin in Ireland, Hong Kong in China, London in UK, Mexico City in Mexico, Paris in France, Prague in the Czech Republic, Riga in Latvia, Seoul in South Korea, Tokyo in Japan, Toronto in Canada, and Zürich in Switzerland.

In this study, we compare high-speed Internet offerings in 22 cities around the world by price, download and upload speed, and bundled services. We have included some of the most relevant findings from our research in the report that follows, as well as a discussion of policy recommendations for the U.S. The report includes:

The results indicate that U.S. consumers in major cities tend to pay higher prices for slower speeds compared to consumers abroad. … The results add weight to a growing body of evidence that suggests that the U.S. is lagging behind many of its international counterparts, most of whom have much higher levels of competition and, in turn, offer lower prices and faster Internet service. It suggests that policymakers need to re-evaluate our current policy approaches to increase competition and encourage more affordable high-speed Internet service in the U.S.