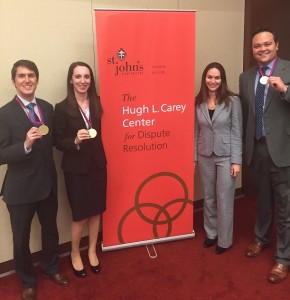 lution Triathlon Competition (October 17-18, 2015).  The team competed at St. John’s Law School in Queens, New York. The competition was established by Hugh L. Carey Center for Dispute Resolution and the Financial Industry Regulatory Authority (FINRA). This year’s competition problem involved a dispute arising between broker and regional manager over a repayment of a promissory note given as an incentive to join a brokerage firm. Meredith Gabay (3L), Steven Lapkoff (3L), and Michael Liik (2L) represented Pace Law School at the competition. The team represented the Claimant, Trajectory-Level in the competition. They were coached by Pace Law Professor Elissa Germaine. Congratulations to Meredith, Steven, and Michael on a great performance!