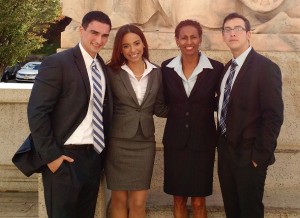 o Rican Bar Association (PRBA) Moot Court Competition.  The team competed in the Northeast Regional along with other New York Law schools in Bronx, New York. The competition was established by the Puerto Rican Bar Association of Florida, New York, Illinois and Puerto Rico. This year’s regional competition problem involved the constitutionality of the Recovery Act-legislation meant to address the debt crisis in Puerto Rico. Angelica Cancel (2L), Jordan Montoya (2L) and Richard Roman (2L) represented Pace Law School at the competition. Angelica, Jordan and Richard represented both the Petitioner, Commonwealth of Puerto Rico and Respondent, Mr. Enrique Guerra Pujol in the competition. The team was coached by the Honorable Judge Sharon Aarons.

In the first round, Pace faced off against St. John’s Law School. Pace advanced to the second round along with Touro Law School. A special congratulation goes out to Angelica Cancel (2L) for receiving the Best Oral Advocate Award of the competition.

The team and coach were honored to represent Pace Law School in this competition and look forward to representing the school again in the final round. The final round will be held in Orlando, Florida over the weekend of October 30, 2015.