Pace Law School hosted its annual Louis V. Fasulo 1L Moot Court Competition on the weekend of March 28-29, 2015. Over 160 first year law students and over 100 Judges participated in this exciting event. The students argued the merits of a fictitious case Petrillo v. Rooks, No. 14-85FD (W.D. Ala. Nov. 17, 2014) at the fictitious Thirteenth Circuit – the subject of their 1L brief – concerning two issues: 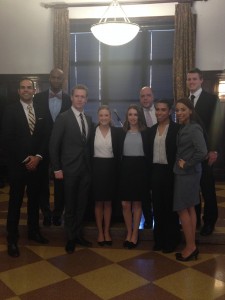 Special Thanks to Loretta Musial, Prof. Louis V. Fasulo, the Judges, the 1L Legal Skills Professors for their work with the first year class and for coming to support the students at this event, Pieper Bar Review for donating the first, second, and third gift certificates prizes, Dean David Yassky, Chartwell Food Services for providing refreshments throughout the day, and the members of the Moot Court Honor Board, including Cassandra Castellano, CJ Croll, Bianca Francois, Arthur Miller, Catherine Peña, Andrea Rodricks, and Michael Pesin-Virovets, among others, who once again put on an excellent event.