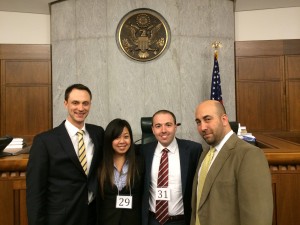 Our Congratulations go to the First Pace Voir Dire Team that placed fifth overall at the Kansas City Show Me Challenge National Voir Dire Tournament and brought home Outstanding Voir Dire Award!  On April 4-6, 2014, Jon Panico (3L), Christopher Schweitzer (3L), and Ellen Zhang (3L) represented Pace Law School in the Kansas City’s Show Me Challenge National Voir Dire Tournament held at the University of Missouri, MO. This was the first time Pace has competed in this unique competition that has teams competing in jury selection, second seating, and delivering an opening statement. This year’s problem involved a man charged with involuntary manslaughter after he allegedly hit and killed a boy while being intoxicated and on a cell phone when operating a vehicle. The team went 2-1 in the three preliminary rounds against Campbell University Law School, Mississippi College School of Law, and Baylor Law School. After several tie-breakers, the team narrowly missed out on advancing to the quarter-finals, placing 5th out of the competing 16 teams. Christopher Schweitzer (3L) received an Outstanding Voir Dire Award for his perfect score in the last round, and a near perfect opening statement score in a previous round.