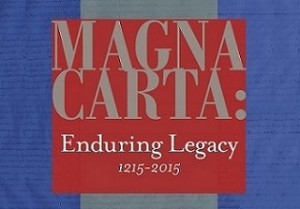 Pace Law School is hosting the exhibit, Magna Carta:  Enduring Legacy 1215-2015, from October 13-26, 2015.  The purpose of the exhibit, which was coordinated by the American Bar Association and the Law Library of Congress, is to educate the public about Magna Carta and explore its legacy.  We are grateful to our co-sponsor, the New York State Judicial Institute, for allowing us to mount the exhibit in its facility on the Pace campus.  The exhibit will be open to the public from 9:00-5:00, Monday through Friday.

A number of law schools have hosted this traveling exhibit which commemorates the 800th anniversary of the sealing of Magna Carta.  Curated by the Law Library of Congress, the exhibit includes sixteen banners which display images of Magna Carta, other documents, illustrations, and political cartoons which were gathered from the rare book collections of the Library of Congress.   The accompanying video describes some of the materials depicted in the exhibit and explains their significance.  To complement the exhibit, the library has mounted two displays on the first floor of Ottinger Hall and one display in the lobby of the Gerber Glass Law Center.  Several lectures and other events have been planned, and a complete list can be found at http://law.pace.edu/magna-carta.  Pace is honored that The Honorable Albert M. Rosenblatt will speak on “Magna Carta: Alive and Well at 800” on October 20, at 5:00 in the Lecture Hall of the Judicial Institute.   He was an Associate Justice of the New York State Court of Appeals from 1998-2006.