Our Law in Film Collection has been recently expanded again.  Among the new additions are William Kunstler: Disturbing Universe (2010), a story about one of the most radical lawyers of all times, Wall Street: Money Never Sleeps (2010), following a lengthy prison term, Gordon Gekko (Michael Douglas) finds himself in a position to stop at nothing to reclaim his place at the top of Wall Street, Fuel (2010), a documentary portraying “A 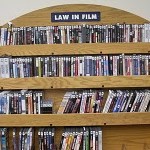 merica’s overwhelming addiction to, and reliance on, oil,” You Don’t Know Jack (2010), the life and deaths of Jack Kevorkian (Al Pacino), known as the Angel of Mercy, Gasland (2010), a documentary film by filmmaker Josh Fox who travels the United States along the Marcellus Shale formation to uncover the negative environmental and health effects of fracture drilling as a means of extracting natural gas, and Concrete Steel & Paint (2009), a documentary film about a men in a prison art class who agree to collaborate with victims of crime to design a mural about healing and how their views on punishment, remorse, and forgiveness collide.