The headlines are very creative: “Snow More,” “Frost Bright”, “A Storm To Be Plowed Of.”  But, has this winter really been so bad?  New York City received 56.1 inches of snow by the end of January.  That doesn’t 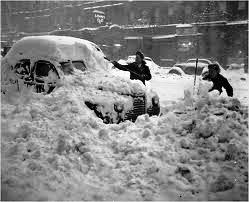 make it the snowiest season.  The city had 75.6 inches of snow during the winter of 1995-96.  We didn’t even break any records for the highest storm totals.  The Blizzard of 1947 dropped 26.4 inches of snow in Central Park in a single day (this photo was taken in Staten Island) and the nor’easter of February 2006 lasted for 16 hours, over two days, and left 26.9 inches in Central Park.  However, New York has broken the record for the snowiest January, and we could break the season record if we get just 20 more inches in February and March!!

Why are we getting so much snow and ice this year?  Perhaps readers will be able to find

some answers in Global Outlook for Ice & Snow, edited by Joan Eamer.  More than seventy scientists from around the world have contributed to this book in order to to explain the linkages they have found between ice, snow and global climate change.  You can find this publication online or in the Law Library at QC926.32 .G59 2007.

How can we cope with all the snow and ice?

At least New York City has not had to remove those mounds of snow by hand this year.  We have snow plows.  Pity  the folks with the

task of cleaning up after the March 1888 storm.  (Read Stephen Turkel’s account of the Blizzard of 1888.)  Almost all transportation was halted by the 40 inches of snow that fell, cutting off all major cities from Washington, D.C. to Montreal.  One of the laws enacted as a result of the damage caused by the storm prohibited catenary in Manhattan (overhead lines or wires used to transmit electricity to trams, trolleys and buses).

‎What if the streets of the city are not cleared by municipal workers?  Will the snow just pile up until the streets are impassable?  What are the actual duties arising from the natural (albeit sometimes unusual) accumulation of snow? 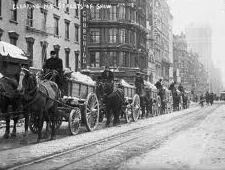 In 1885, the Michigan Supreme Court looked at the natural accumulation doctrine and stated that “there is no responsibility [to keep ways clear of snow and ice] unless there has been such an accumulation as will amount to an obstruction of the way which is dangerous.”  McKellar v. City of Detroit, 23 N.W. 621 (Mich. 1885). It also noted:

A great deal, however, may fairly depend on local usage in determining duties concerning highways in winter [and, w]here it is customary to treat the removal of snow and ice as a regular part of highway management, the failure to look after it may be properly regarded as wrongful and negligent. In the eastern states this is done much more generally than elsewhere ….

The case is still being cited today.  However, the Michigan court also observed that, although “cities are empowered to clear their streets, and frequently to remove snow … this has seldom if ever been made obligatory.“ Then, as now, cost was a significant consideration. “[N]o amount of diligence can supply an adequate force and adequate means to detect the inevitable accumulations of snow trampled into hardness on every cross-walk or in every roadway.”

About 50 years later, in a case brought by an individual who had slipped on ice in New York City, the New 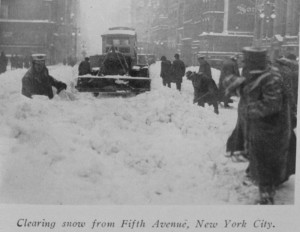 York Court of Appeals affirmed a directed verdict in favor of the defendant, finding no actionable negligence on the part of the City of New York.  The court noted that the ice “was part of the residue of a three day blizzard … and the undisputed testimony showed that at the very moment of the accident the city still had an army of over 50,000 men at work combating the consequences of the blizzard while the thermometer stood at 19 degrees below freezing.” Reutlinger v. City of New York, 22 N.E.2d 165 (N.Y. 1939).  More recently, in Mazzella v. City of New York, 72 A.D.3d 755, 756, 899 N.Y.S.2d 291 (2010), the Appellate Division, 2d Department, held:

Under the storm in progress rule, the City (of New York) generally cannot be held liable for injuries sustained as a result of slippery conditions that occur during an ongoing storm, or for a reasonable time thereafter.

In New York City, all homeowners are required to remove snow from sidewalks in order to clear a path for pedestrians.  However, there is a grace period.  If the snowfall ends between 7:00 AM and 5:00 PM, the sidewalks must be cleared within four hours but, if the snowfall ends between 5:00 PM and 7:00 AM, sidewalks do not have to be cleared until 11:00 AM.  In White Plains, the sidewalks abutting single family residential homes have to be cleared by noon whenever a storm ends during the night, and within ten hours whenever a storm ends during daylight hours.  Make sure to check what the law is in your area.

While you’re at it, check your local area for the best places for sledding and cross-county skiing!