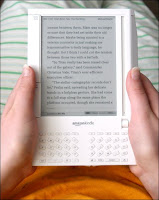 As reported by New York Times, the new Amazon’s Kindle is lighter, brighter and chattier. Kindle, an electronic reader or an e-book reader, was launched in the United States in November 2007. The newest version of this e-book reader is said to be simpler and more intuitive.

The Kindle 2 is thinner (thinner than an iPhone, to give you some idea), has a crisper black-and-white display, turns pages much more quickly and should hold its battery charge for about 25 percent longer than the previous version. New features include text-to-speech and the ability to transfer content to other devices (such as mobile phones and other Kindles). It’s the same price as the outgoing model ($359) and will be shipped Feb. 24.

What do you think? Do you have any experience using kindle? Do you still prefer paper books? Share your comments and feedback!