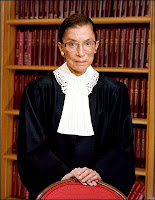 As reported by many newspapers and blogs, the Supreme Court Justice Ruth Bader Ginsburg is currently hospitalized at the Memorial Sloan-Kettering Cancer Center in New York after undergoing a surgical procedure for early-stage pancreatic cancer.

Justice Ginsburg will likely remain in the hospital approximately 7-10 days. Justice Ginsburg had no symptoms prior to the incidental discovery of the lesion during a routine annual check-up in late January at the National Institutes of Health in Bethesda, Maryland. A Computerized Axial Tomography (CAT) Scan revealed a small tumor, approximately 1 cm across, in the center of the pancreas. [U.S. Supreme Court Press Release]