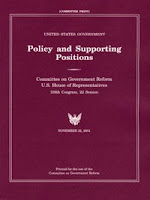 This publication contains data on over 7,000 Federal civil service leadership and support positions in the legislative and executive branches of the Federal Government that may be subject to noncompetitive appointment (e.g., positions such as agency heads and their immediate subordinates, policy executives and advisors, and aides who report to these officials). the duties of many such positions may involve advocacy of Administration policies and programs and the incumbents usually have a close and confidential working relationship with the agency head or other key officials.