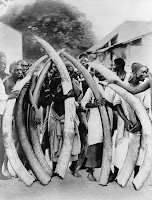 BBC reports on October 28, 2008 the first officially sanctioned sale of ivory in southern Africa for almost a decade opened on Tuesday. Namibia, Botswana, South Africa and Zimbabwe will auction more than 100 tonnes of ivory from stockpiles to buyers from China and Japan. The raised money is supposed to go into elephant conservation projects. The sale of ivory was globally banned in 1989. By allowing this trade, many speculate it will encourage poachers in Africa to kill more elephants and it will open additional illegal trade. Read the full article here, and leave your comment.