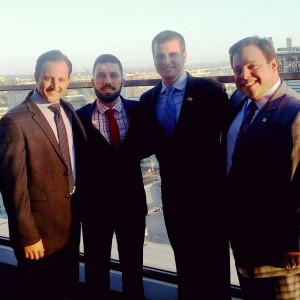 Coach: Prof. Eylan Schulman
Team Members: Cassandra Castellano (2L), Malini Dhanraj (2L), Catherine Peña (3L), Ancy Thomas (2L)
The competition involved a problem dealing with a plaintiff’s termination as a result of her exercise of her rights under the Family Medical Leave Act to care for her mother, who was undergoing cancer treatment. 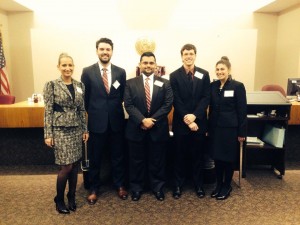 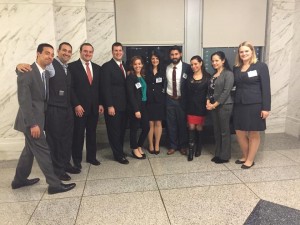 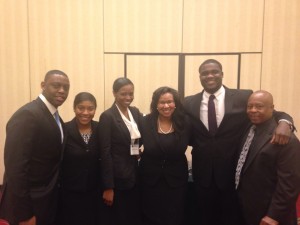 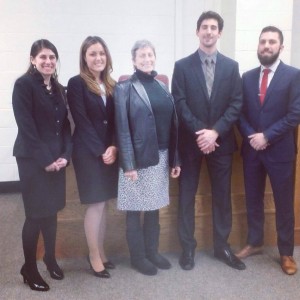 Show Me Challenge National Voir Dire Tournament // University of Missouri-Kansas City School of Law (April 9-11, 2015)
Coach: Prof. Eylan Schulman
Team Members: Graham Chapman (3L), Alex Cumella (3L), Courtney Schneider (3L)
The competition involved a wrongful death law suit in which the mother of the victim alleged that her son died as a result of being mistreated by police officers who tasered him multiple times and physically restrained him while in custody causing him to suffer a cardiac arrest.

Team Members: Brielle Emhof (2L), Marissa Koerner (3L), Julisa Medina (3L)
The competition involved an issue of whether a city’s residency ordinance, requiring city employees to regulate residency in the state based on immigration status and prohibiting landlords from renting to undocumented individual, was preempted under the “regulation of immigration.”

International Environmental Moot Court Competition // Stetson Law (February 6-8, 2015)
Coach: Prof. Matthew Brotmann
Team Members: Steven Lapkoff (2L), Kelly Nishikawa (3L), Charter Williams (3L)
The competition involved shark finning and trade restrictions issues in which a fictional State of Alopias violated international law because its nationals continued the practice of finning and spinning of mako sharks within its territorial waters and exclusive economic zone, and whether the fictional republic of Rhincodon violated international law by banning the importation of fish and fish products from the States of Alopias as a result of the questionable practice. Charter Williams of Pace received an award as Best Oralist in the preliminary rounds.

Animal Rights Law Moot Competition // Lewis & Clark Law School (February 27 – March 1,  2015)
Coach: Mary A. Liebowitz & Dhara Patel
Team Members: Brad Landau (2L), Andrea Rodricks (3L)
The competition involved the issue of unconstitutionality of a fictitious statute, the Meat Eater’s Right to Know Act (MERK Act), which required slaughter plants to capture video in all locations where animals are kept. The problem included a challenge to the act by the American Slaughterhouse Association under both the First and Fourth Amendments.

National Energy and Sustainability Moot Court Competition // West Virginia University College of Law (March 12-14, 2-15)
Coach: Prof. Karl Rabago and John Bowie
Team Members: Rafael Corbalan (3L), Levan Thomas (3L)
The competition involved two issues: whether a particular midstream gas provider could be considered a public utility; and whether there was sufficient evidence in the Army Corps of Engineers’ record to uphold a jurisdictional determination of wetlands and deny a permit needed to construct a pipeline. 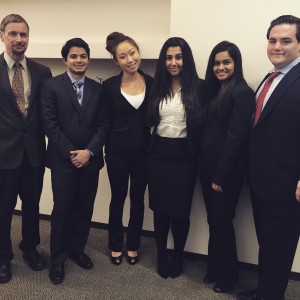 Coach: Prof. Peter Widulski
Team Members: Nina Lee (2L), Brittany Patane (2L), Luis Rodriguez (2L), Ancy Thomas (2L), Anthony Ortiz (2L)
The competition titled Situation in Astafur, involved four issues: whether Astafur was competent to make an Article 12(3) Declaration, triggering the jurisdiction of the Court over war crimes committed in Pantos, despite its lack of effective control over the territory of Pantos at the time of submission of the Declaration; whether the Court had jurisdiction under the objective territorial principle over crimes committed by a Non-Party State (Braanos) via cyberspace that have an effect in a State (Astafur) that has lodged an Article 12(3) Declaration; whether the widespread disruption of communications and electricity during a revolt against the government of Astafur via a DDS attack constituted a war crime; and whether there should be two different victims’ legal teams under separate Victims’ Legal Representatives in this case because one portion of the victims supported secession and the other favored remaining part of Astafur.

Prince Evidence Competition // Brooklyn Law School (March 26-28, 2015)
Coach: Prof. Peter Widulski
Team Members: Marina Gubenko (2L), Jaclyn Halk (2L), Cassandra Papandrew (2L)
The competition involved an appeal to the US Supreme Court in the case of John Habib v. United States, exploring FRE 702 (expert psychiatric testimony regarding he credibility of a witness); the applicability of the Fifth Amendment privilege against compelled self-incrimination to the production of corporate documents in the possession of the defendant; and the qualification of statements as evincing religious bias made by jurors during deliberations as extraneous prejudicial information under FRE 606(b)(2)(A) and whether said statements deprived the defendant of his Sixth Amendment rights to a fair trial and an impartial jury.

Willem C. Vis International Commercial Arbitration Moot // Vienna, Austria (March 28 – April 2, 2015)
Coaches: Bryn Fuller, Esq. & Prof. Linda Wayner
Team Members: CJ Croll (3L), Brianne Cunningham (2L), Seham Elmalak (3L), Sara Girgis (2L)
The competition involved a case of Vulcan Coltan Ltd. v. Mediterraneo Mining SOE, in which the buyer, Vulcan Coltan Ltd. and the seller, Mediterraneo Mining entered into a contract for the sale of Coltan, a rare mineral. The competitors dealt with procedural and substantive issues:  the controversial application of the CISG to contracts formed in a commodity market; and whether a third party (a parent company in this case) can be forced into arbitration proceedings and whether the Emergency Arbitrator’s order had merit. The Pace team advanced to the top 32 round.