Our congratulations go out to the Pace 2016 International Environmental Moot Court Competition team that placed as a top 2 finalist in the North American Regional Round, February 19-21 in Washington D.C. The team will advance to compete in the International Rounds in Gulfport, Florida this April 13-16!

The team was honored to represent Pace Law School and bring home three awards. Patrick Logan (2L) received an award for 2nd place oralist of the preliminary rounds, and another award for best oralist of the final round. 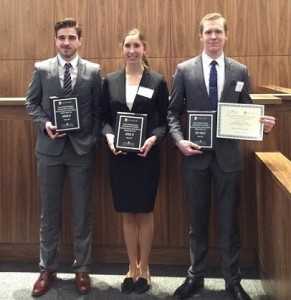 Congratulations Conor, Patrick and Leigh on their outstanding performance. We are excited to see them compete against the top teams of the world during the international rounds!